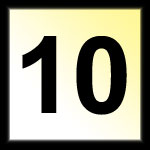 Congrats to all of you in the Beat The GMAT community who were able to finish your GMAT this year! By finishing this test, you've made a big step forward toward getting admitted to the business school of your dreams.

And a big thanks goes out to all Beat The GMAT members who shared their GMAT experiences by writing a debrief in the I just Beat The GMAT forum. Your GMAT prep debriefings are not only inspirational to our community, but they will serve as study strategy artifacts that will help generations of future GMAT test takers.

Continuing a tradition from last year, for the next ten days I will highlight this year's 10 most popular GMAT debriefings from the I just Beat The GMAT forum.

Starting things off, the tenth most popular GMAT debriefing in 2010 was written by hman768: 720: How I did it and other random thoughts!

hman768 notes that he got his inspiration from reading stories in the I just Beat The GMAT forum:

I first discovered this forum in February and I have become an I Just Beat The GMAT addict. It is the first thing I look at everyday hoping to find some wisdom or hope for a great score. I would read each debrief and look forward to the day when I could write my own.

It's an awesome debrief. Read the whole thing here: 720: How I did it and other random thoughts!