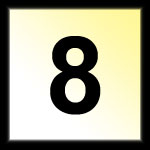 The eighth most popular GMAT story this year was written by abhi84v: 770 (Q51 V44) AWA 6.0 => More than satisfied. abhi84v has a relatively common profile on Beat The GMAT; he's strong in math, but naturally weaker in verbal. But through his solid study strategy, he was able to achieve that moment we all crave when taking the GMAT:

Closed my eyes, prayed to the Almighty and opened my eyes to find a pleasant 770. Tried to control my excitement as I did not want to disturb the fellow examinees but did a massive fist-pump as soon as I was out