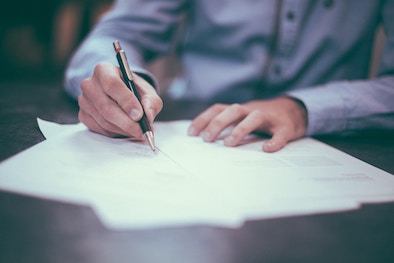 A well-written MBA recommendation letter requires many of the same elements as successful application essays: they must be unique, highlight standout qualities of the applicant, and use examples to SHOW those qualities, rather than simply telling the reader what the writer thinks about the applicant. Whether youve been asked to write a letter, or simply want some tips to pass on to your recommender of choice, weve got you covered.

WHAT IS A LETTER OF RECOMMENDATION?

A letter of recommendation, most simply put, is a chance for the admissions committee to hear from someone who has worked with or supervised the prospective student applying for admission. Think of these letters as your third party character witnesses, vouching for your value and potential, and validating the qualities that hopefully already shine through from your essays, resume, and other application materials.

Most schools will require applicants to submit two recommendation letters. The substance will varysome programs have specific questions they want recommenders to answer, while others leave the choice of content up to the writer. The common theme throughoutallof these letters, however, is that the program wants to hear from someone OTHER than the applicant about the applicants qualities, past performance, how they stack up against peers, and their potential.

WHO CAN WRITE A LETTER OF RECOMMENDATION?

The short answer is almost anyonevery few schools explicitly request that the recommender be in a specific relationship to the applicant. But the reality is thatchoosing a GOOD recommenderalmost certainly leads applicants to a few types of people. Requesting the favor of a written MBA recommendation letter is a process that requires some careful thought.

The basic requirements for a recommender are an understanding of you and your work, a good relationship, and the ability to express themselves coherently in a written form. Lets break it down:

Who should I ask?

Given the criteria mentioned above, applicants usually end up with one of the following people, roughly ranked from most to least useful:

ASKING FOR AN MBA RECOMMENDATION LETTER

Once you have settled on your recommenders, you should lose no time in asking them to write the letter. The more time you give them, the better forallinvolvedyou will save both them and yourself the stress of a time crunch.

When you ask someone for a letter of recommendation, remember that you are asking them for a favor. As such, make sure that you have done the legwork of figuring out what you need from themwhat are the requirements of the letter for various programs? How will they submit the letter? What are the deadlines? Do not ask the recommender to do extra work on your behalf.

HOW TO WRITE A LETTER OF RECOMMENDATION

For recommenders WRITING letters of recommendation, or applicants looking for tips to pass on to their recommenders, here are the key steps in the process.

Once youve gone through the process detailed above, and are ready to start writing, take a look at the prompts. What does the school want to know? Which qualities are the best match for the questions? If the adcom hasnt given much guidance, use the following template:

Introduce yourself, including your position and company, and then state your relation to the applicantwhen and in what capacity did you work together? For how long? Were you a direct supervisor? Indirect supervisor? Establishing your hierarchical relationship is crucial.

Rank the applicant amongst their peers, or amongst others you have worked with at the same level throughout your career, giving the adcom a sense of just how much of a superstar this person is. In the top five out of the hundreds of associates Ive worked with over my 20-year career means a lot more than one of the best. Then name 2-3 KEY qualities of the applicant that you want to highlight (drawing from the work youve already done), and will discuss in the following paragraphs.

SHOW us those qualities, one by one, in the paragraphs that follow. Tell us about the project in which the applicant achieved a standout result because of X and Y actions that demonstrate quality A. Or the time they stepped up and took initiative, demonstrating quality B. These carefully chosen examples should not only demonstrate the qualities you want to highlight, but that this applicant is exceptionalnot your average worker bee.

Conclude by explicitly recommending the applicant, stating your belief in their high potential and the success in their future.

WRITING YOUR OWN LETTER OF RECOMMENDATION

Just dont do it! Applicants should never write their own letter of recommendation. As we pointed out earlier, the whole point of a recommendation letter is to give the adcom a valuable outside perspective, so writing your own letter can severely weaken your candidacy, not to mention bring up serious concerns about your integrity should it be discovered. Adcoms read enough of these letters to know what they SHOULD look like, and they dont take kindly to people trying to game the system.

What if I come from a culture/company where western-style letters of recommendation are not common?

Still, dont do it! Its 2019, business is very internationalized, and there are very few companies where no one has ever heard of a letter of recommendation. But there are some places where the practice of supervisor recommendation is much less important in the job marketand the adcom knows about them. Your recommender might not have as much experience, and he might not be able to write a good, detailed letter, but the adcom will know that it is authentic. More to the point, if you write the letter, the adcom will know that it is inauthentic (when compared to others from your country or company).

What if my recommender doesnt speak English?

Dont write your own letter! Just have the recommender write in their native language and get it translated. Or, if that just isnt an option, translate it yourself. But that should be a last resortyou shouldnt be touching the letter of recommendation atall!

What if my recommender would prefer that I write it and put their name on it?

Sadly, this does happen. Its usually an indication that the recommender probably isnt your best choiceif they arent willing to put in an hour or so writing, are they really that invested in your success? But sometimes this is the only option. Youre in a tough place if this is the case, but you can still make lemonade. Get as much as possible from the recommender in terms of notes and rough drafts and have someone else put it together for the recommenders review. Even in this case, you shouldnt be the one doing the actual writing. The application will be full of your writing, and the adcom will be able to tell if you also wrote the LOR.

Keep it simple. While you do want a strong MBA recommendation letter in your profile, its not the most important piece of the puzzle. Plan ahead, think hard about your best possible recommender, get the prompts into your recommenders hands, and then devote your time to the GMAT and your essays. For better or worse, this part is mostly out of the applicants hands.

***NEW Admissionado Products & Services for MBA/Masters!***Now, read up and get smart:

Thatll get you started.Still have questions? Reach out, and lets gab.

Our only requirement is that you dont prefer warm milk over cold milk. Everyone else, 100% welcome.