How to Get Faster at GMAT Verbal 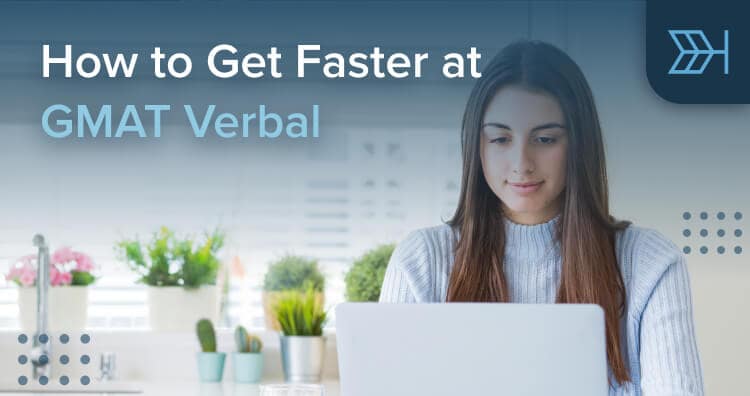 People often wonder how to get faster at GMAT Verbal, and it’s not surprising that they do. After all, the Verbal Reasoning section of the GMAT gives you only 65 minutes to answer 36 questions, or under two minutes per question. Also, some GMAT Verbal questions are pretty tricky or are associated with dense passages.

So, completing the Verbal Section of the GMAT test on time can be challenging. Fortunately, by making the right moves, anyone can speed up in GMAT Verbal, finish the section on time, and achieve his or her GMAT Verbal score goal. So, let’s discuss some of those key moves, starting with developing strong Verbal skills.

When people want to get faster at answering GMAT Verbal questions, one thing they often do is start answering practice questions with a timer going. While, clearly, there is some value to including timed practice in your GMAT prep, for the most part, doing timed practice is not the best way to study for GMAT Verbal. In fact, people who do all their GMAT Verbal practice questions timed are often the same people who have the most difficulty with GMAT Verbal time management on test day. The reason for this pattern is that people who have done all their practice timed haven’t given themselves time to develop strong skills.

So, the most powerful way to speed up in GMAT Verbal and complete the Verbal section on time is to develop strong GMAT Verbal skills by doing Verbal practice questions untimed, carefully analyzing every choice of each question you see.

Let’s now discuss another powerful way to speed up in GMAT Verbal, working on efficiency.

Another key thing you can do to maximize the value you get out of the time you have for the Verbal section of the GMAT is work on efficiency. In other words, during your GMAT test prep, in addition to working on getting to correct answers to Verbal questions consistently, you can work on getting to them efficiently.

For instance, in Sentence Correction, you can develop skill in efficiently working your way through the choices by eliminating easy out answer choices first and then efficiently identifying the key differences between the remaining choices. In Critical Reasoning, you can learn to read passages well the first time. read the question stem after the passage rather than before it so that you don’t read the stem twice, and work through the choices in an efficient manner with minimal rereading or repeating.

In Reading Comprehension, you can learn to use your memory and keywords to efficiently find the information you need for answering the questions, and there are many other ways to become more efficient in how you go about answering each type of GMAT Verbal question.

Any move you make to become more efficient in how you go about answering questions is going to make you faster at GMAT verbal.

Another way to speed up in GMAT Verbal is to read more carefully. Let’s discuss that now.

This next move for getting faster at GMAT Verbal may seem a bit counterintuitive, because the move is to read more carefully, which you might think would slow you down. However, here’s why this move works. Reading more carefully, even if it slows you down a little, sets you up to answer verbal questions more quickly because it results in your having a more solid basis for choosing an answer.

For instance, people often read Critical Reasoning passages quickly, and even skip a word here and there in the interest of saving time. Or sometimes they don’t read all of a verbal answer choice because they feel that they can eliminate the choice on the basis of what the beginning of the choice says. Any such moves can end up wasting, rather than saving, time because they cause you to operate on incomplete information.

So, what can happen, for instance, is that you miss a key detail in a CR passage or answer choice that indicates why one choice is better than others. In such a case, you can end up circling among choices not sure which to choose because you don’t have the information you need for deciding. If, on the other hand, you read the passage carefully and thus set yourself up with all the information you need for choosing a choice, the correct answer to the question may practically jump out at you.

For some people, reducing note taking can result in a significant improvement in GMAT Verbal performance. So, let’s now discuss why.

For the deep dive on all strategies, view our full article on Target Test Prep’s blog.