Face Off: Columbia vs NYU Stern 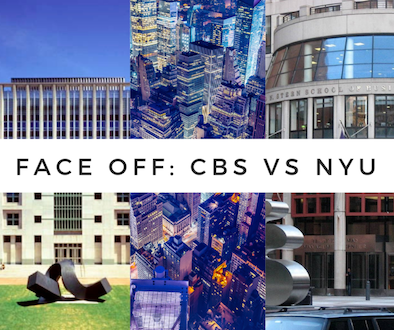 The school selection process for MBA applicants can seem daunting. With so many highly ranked business schools, how can you decide which one is right for you? In SBC's new blog series Face Off, well tease out the strengths and differences between two similarly ranked b-schools. Plus, we'll highlight noteworthy elements of their admissions processes. Now up: the Columbia MBA application versus the NYU Stern MBA application.

How do the admissions processes differ between the two schools?

Each Columbia MBA application submitted usually passes through three rounds of internal review. An admissions officer does the initial read-through. Next, a more senior admissions officer conducts a second read. Then, if both agree on the decision, it likely stands. If they disagree, it usually goes to committee. The assistant dean approves them all, but definitely trusts the readers. Not everyone goes to committee.

An MBA application submitted at NYU Stern School of Business is typically reviewed in two rounds. Rounds one is by an admissions officer, and the second read is by a senior director. Applications rarely receive more than two reads. Unlike with the Columbia MBA application process, NYU Stern doesn't have a formal "committee" that meets to discuss cases.

Do both schools have a strong advantage, being located in one of the worlds best cities? New York City's urban business setting is definitely an advantage for many career paths, including finance. At both Columbia Business School and NYU, accessibility to recruiters and world-class industry experts/professors is unparalleled. The advantage is relative though. Here again, its all about fit. In recent years, our clients have pushed career goals more towards technology and consulting, less finance.

Programs such as MIT, Stanford and Berkeley Haas likely have a location and recruiting advantage for a candidate interested in tech. So, the New York advantage isnt 100% for many industries outside of finance.

Both Columbia and NYU are highly-ranked, so how else should prospective MBAs judge the schools?

We see that applicants almost always prioritize reputation in selecting between CBS and NYU. Brand strength is signaled by relative ranking across the major media publications, including U.S. News and World Report. CBS typically ranks in the top 5, whereas NYU usually ranks between 5 and 15 among US MBA programs.

If one's career path shows competitive rigor/leadership, complemented by strong GPA/ GMAT, the applicant will usually pursue CBS via its early decision round and consider NYU as a back up choice. Deciding which program to prioritize requires an honest self-assessment of MBA candidacy strength.

Aside from rankings, MBA applicants will turn to criteria such as: student culture, specialized programs and, when available, scholarship offers.

Admission trends in the recent season for NYU Stern show more flexibility with admit profiles, and this has delivered benefits to the quality of the student class. For example, we see NYU Stern more willing than CBS to accept a candidate whose employer is lesser recognized and/or whose GMAT isnt as high. The upside of this relative flexibility by NYU Stern is that the program tends to attract a down-to-earth, humble student class. Any sign of competitiveness or arrogance was a turn off, according to a former Stern admissions officer who works at SBC. We also were sensitive to those leaders that were pushy or always needing to lead.

Choice between NYU and CBS can be driven by the fit with particular programs. NYUs new one-year Tech MBA and Fashion & Luxury MBA programs draw interest from specialized candidates.

Media, tech, and retail are seen as stronger at NYU than CBS. CBS is the only top US full-time MBA program to offer a January intake through its accelerated program. This option is attractive for Columbia MBA application candidates eager to matriculate asap (Jan is earlier than Sept intake), such as those who are already farther along professionally. Acceptance rates are higher for the January intake of the Columbia MBA application than for the fall intake. While historically, CBSs January intake didnt offer a summer internship, the program is now incorporating changes to offer professional experience concurrent to coursework. Both NYU and CBS have been trying to move away from being a finance school and more toward a non-traditional school (e.g. social impact, tech, entrepreneurship). But each specializes in different ways.

One lesser known fact that we wish MBA applicants would prioritize: NYU is more generous than CBS with scholarship offers for highly desirable candidates. The Columbia MBA application has an ED deadline with binding deposit. Therefore, there's less incentive for CBS to offer scholarship money to encourage yield. CBS, through its ED deadline, does not need to lure a candidate away from accepting another school.

In the past season, we saw almost double the scholarship value from NYU relative to CBS. Notably, Stern offers more full tuition scholarship than CBS. These are data points for applicants to full time MBA programs who received scholarship concurrent to admit notification.

Do employment outcomes differ between the two schools?

CBS has slightly higher placement into consulting and finance over NYU. Notably, last year NYU had 10% more placement into investment banking than CBS. Likely this occurred because many CBS admits already had banking exposure pre-MBA. The typical finance-minded NYU admits, meanwhile, seek to go into banking after the MBA.

NYU had more placement into areas that reflect the specialized programming at the school, such as Entertainment, Media, Tech and Retail.

What are the top reasons to go to Columbia? What are the top reasons to go to NYU? We hope this deep-dive comparison between the Columbia MBA application and NYU MBA application has given you helpful intel as you make your school selection decisions this season. Finally, please leave any questions you may still have in the comment section below. Stay tuned for more Face Off posts to come!