I recently received a request to do more on Integrated Reasoning, so here you go: a Table Analysis problem. These problems will consist of some kind of complex table (sometimes with 20+ rows and / or 6 to 7 columns!) and one three-part question. We have to answer all three parts correctly in order to earn any points. The one were going to try has been released as a sample question on the mba.com website.

Lets try out the question: here is the link to the problem. Just in case that link changes, you can also click on this link to go to the next-gen GMAT website, and then, toward the bottom of the page, click on the Table Analysis link. Were going to try the second problem (with the table labeled Percentage of Population Visiting).

Note: when you are done, do NOT click the next button. Just leave it up on the screen and come back here. Also, Im going to reproduce the table below, but you wont be able to sort the data and thats a key feature in answering these question types. So while you can technically do the problem below, I strongly recommend that you go look at the original using the link above.

Set your timer for 2.5 minutes and go! 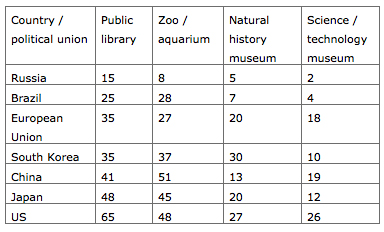 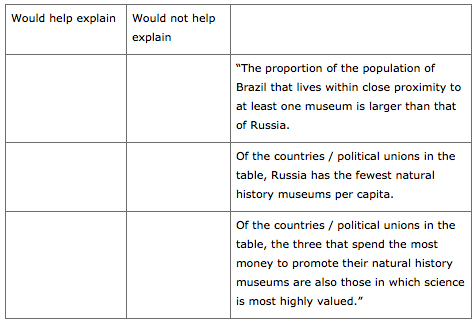 Believe it or not, this is one of the smaller tables. Whether you have a huge table or a smaller one, though, youre only going to be using a subset of the given information sometimes only a tiny percentage of the given data. (I remember one table with perhaps 20 rows, and I only needed to use 3 of them in order to answer all three parts of the question!)

The question asks us whether the statements, if true, would help to explain the information in the table. This feels like a critical reasoning-type question but its not exactly like any of the existing CR types. In this case, if a statement makes me think, hey, yeah, if this statement is true, then I can see why the data in the table is what it is, then Ill pick would help explain. Otherwise, Ill pick would not help explain."

The proportion of the population of Brazil that lives within close proximity to at least one museum is larger than that of Russia.

Lets see. They mention only Brazil and Russia, so I only need to look at those two rows. Luckily, theyre already right next to each other in the table.

The statement says that, in Brazil, people are more likely to live in close proximity to a museum, which naturally would make it easier to visit a museum. There are two types of museums listed on the table: history and science. In both cases, the data indicates that a greater percentage of the Brazilian population than the Russian population visited a museum. That makes sense, given that more people in Brazil live closer to the museums.

Select would help explain for statement 1.

Of the countries / political unions in the table, Russia has the fewest natural history museums per capita.

Per capita. What does that mean? Literally, it means for each person or per person. You might read a statistic that says the per capita annual consumption of apples is 8. On average, the statistic is telling us, one person eats 8 apples each year.

And our third statement:

Of the countries / political unions in the table, the three that spend the most money to promote their natural history museums are also those in which science is most highly valued.

Hmm. So, if a country spends a bunch of money to promote its history museums, what might we expect to happen? Well, if the promotion is successful, that would likely mean that many people would visit those museums. I think I need to re-sort the data for this one.

Click to sort by natural history museum. The top four countries are South Korea (30%), US (27%), and Japan and the European Union (tied at 20%). If science is also most highly valued in those countries, we would expect high percentages of people visiting the science museums as well. Is that happening?

This statement doesnt seem to go along with the given data. Select would not help explain for statement 3.

(1) You will NOT need to use all of the data, even when given a smaller table like the one in this problem. Dont try to read the table thoroughly or take in all of the data just know what kind of information is available.

(2) The ability to re-sort the data is critically important to our ability to answer these questions efficiently. In general, were going to be trying to save time on Table Analysis questions, as they dont tend to require as much reading as some of the other question types. Learn how to decide when and how to re-sort the data.

(3) If you do get a really big (20+ row) table, dont panic and dont think youre going to need extra time. Youll still be given just three statements. Youre still only going to need a fraction of the data presented sometimes only a very small fraction. Ignore all that extra data!

* All quotes copyright and courtesy of the Graduate Management Admissions Council. Usage of this material does not imply endorsement by GMAC.