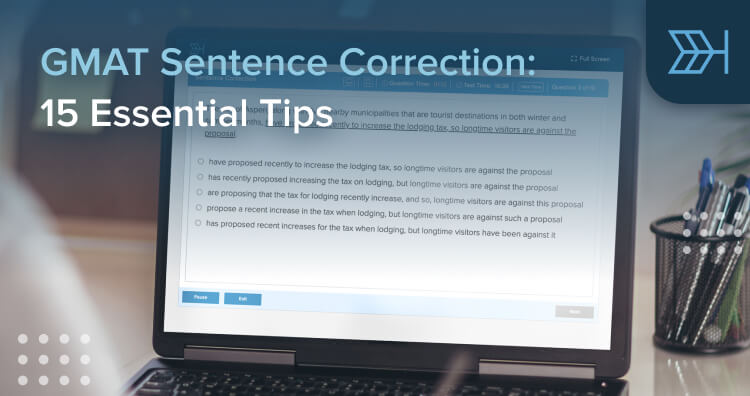 Studying GMAT Sentence Correction (SC) can be a nerve-racking experience for test-takers. As a result, it’s no surprise that everyone is looking for shortcuts, secrets, and tricks that will “crack” the GMAT SC code.

There is plenty of advice out there about how to master Sentence Correction, but the truth is, gimmicks won’t earn you a high GMAT Verbal score, and in some cases, relying on shortcuts may even hurt your score.

How can shortcuts hurt your GMAT Verbal score? Well, much like GMAT Quant, GMAT Verbal tests the level of sophistication of the thinking you use when you answer questions. Thus, memorizing rules alone isn’t enough to take your Sentence Correction skills from basic to advanced.

There are, however, some must-know strategies that all GMAT students can put into practice to ensure that they’re attacking Sentence Correction questions in a smart, efficient way.

In this article, I’ll share 15 essential tips for understanding and ultimately mastering Sentence Correction. Whatever stage of studying GMAT Verbal you’re at, these tips will be invaluable for helping you approach Sentence Correction questions.

Tip #1: Learn and Practice One Sentence Correction Topic at a Time

There are numerous concepts to learn for GMAT Sentence Correction, and numerous ways each concept can be tested. Some common mistakes that students make are:

These mistakes will make your GMAT Verbal prep disorganized and inefficient, and you’ll quickly hit a wall. On the contrary, a much better approach is to take a topic-by-topic approach, starting with basic Sentence Correction concepts and progressing in a linear fashion to more advanced ones. In fact, you can apply this tip to your GMAT preparation in general: You will learn more and learn faster if you proceed in this manner.

Expecting to perform well on Sentence Correction questions without FIRST mastering the concepts on which those questions are based is unrealistic.Instead, you need to learn as much as you can about a particular SC topic, and then answer numerous realistic practice questions to drill what you’ve learned about that topic, instead of just bulldozing through dozens of random practice questions as your method of learning.

After learning a particular SC topic, engage in focused practice with 30 or more questions involving that topic. Then, as your skills improve and you learn about other SC topics, practice with questions that test you on concepts from multiple topics. Keep in mind that, if your foundational knowledge is fairly strong, you may move through more basic concepts and questions relatively quickly. However, don’t fool yourself into thinking that you can skip over an “easier” SC topic (for example, subject-verb agreement) altogether. Remember, the GMAT can come up with some pretty tricky ways to test basic concepts.

For more on how students truly master GMAT topics, check out our article on the learning phases of GMAT preparation.

There is no denying that you won’t get very far in GMAT Sentence Correction if you don’t know grammar rules. However, too often, students rely on grammar as the sole determinant of which answer choices are correct and which are incorrect in SC questions. And you know what? The GMAT test-makers design Sentence Correction questions to test whether you’ll do just that!

Sometimes, incorrect answers in Sentence Correction are perfectly grammatical, yet they convey illogical or nonsensical meanings. Unfortunately, many GMAT students focus on finding grammatical errors in order to eliminate answer choices while neglecting to analyze the sentence meaning.

Don’t allow yourself to fall for this trap. It’s very easy to get stumped deciding between two answer choices because you failed to consider each sentence’s meaning or to choose a wrong answer because it’s grammatically correct, and you didn’t notice that it makes no sense.

Of course, your knowledge of grammar rules will allow you to spot common SC errors such as subject-verb agreement errors, pronouns without logical antecedents, and dangling modifiers. Spotting those grammatical errors will allow you to quickly eliminate certain answer choices. However, any time you don’t find a “slam dunk” reason (or two) to eliminate an answer, you should ask yourself, “What is the meaning conveyed by this version of the sentence if I read it literally? Does that meaning make sense?” Furthermore, when you think you have a correct answer, double-check the meaning conveyed by that version of the sentence to ensure that the meaning is logical. You know that grammatically incorrect answers are incorrect; just don’t assume that grammatically correct answers are automatically correct.

Tip #3: Plug Each Answer Choice into the Full Sentence

A surefire way to spot both violations of grammar rules and errors in meaning is to plug each answer choice into the full sentence.

The reason this tactic is essential is that the underline in a Sentence Correction question (i.e., the portion of the sentence that is different in each answer choice) is strategically placed to make some incorrect answers look correct if you don’t read them in context.

You have to read each sentence version as a whole. If you look at an answer choice in isolation, you’re likely to miss or forget some aspect of the non-underlined portion of the sentence that makes that answer choice incorrect. In fact, GMAT test-takers have committed countless careless mistakes by reading the full sentence only when they first see an SC question, and then relying on memory when evaluating which answer choice will create a correct sentence. Often, test-takers use that method because they feel pressed for time, and often they end up missing errors that they would have easily recognized had they plugged the answer choice into the full sentence.

Similarly, if you look at a sentence version only in pieces, you can miss big-picture issues, such as illogical sentence structures that convey nonsensical meanings or violate grammar rules. Identifying such issues may be well within your skill set. However, by not taking the full context into account, you “give away” questions you could otherwise answer correctly, thus lowering your GMAT score. So, don’t make the mistake of ignoring the non-underlined portion of the sentence.

Tip #4: The “Original” Sentence Is Not Special

Some GMAT students get the impression that the original sentence in an SC question stem conveys the “true” or intended meaning of the correct sentence, or that answer choices that deviate significantly from the “original” sentence will not be correct. Indeed, these Sentence Correction myths have been around for a long time.

In reality, all answer choices must be weighed equally. Choice (A) does not set a standard for the sentence meaning or structure that must be followed by the correct answer. In fact, in many Sentence Correction questions, all five answer choices provided are quite different from one another. A correct answer choice may create a sentence version that conveys a meaning that is very different from the meaning created by choice (A), or incorporate a word or phrase that didn’t appear in choice (A) (or eliminate one that did).

As a result, you must resist the urge to view the meaning of the sentence in the question stem as the “real” or “correct” meaning. There is no intended meaning that the correct sentence version has to express. The correct version will be the one that most effectively expresses a logical meaning.