When Your High School Algebra is Wrong: How the GMAT Breaks Systems of Equations Rules 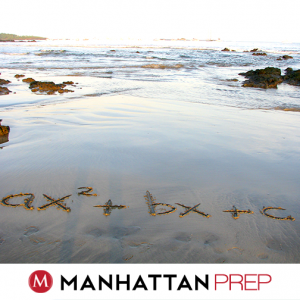 If you have two equations, you can solve for two variables.

This rule is a cornerstone of algebra. Its how we solve for values when were given a relationship between two unknowns:

We set up two equations:

Then we can use either substitution or elimination to solve. (Try it out yourself; answer* below).

On the GMAT, youll be using the 2 equations 2 variables rule to solve for a lot of word problems like the one above, especially in Problem Solving. Be careful, though! On the GMAT this rule doesntalwaysapply, especially in Data Sufficiency. Here are some sneaky exceptions to the rule

On DS questions, the GMAT wants you toassumethat if you have 2 equations, you can always solve for the values of 2 variables. Consider:

What is the value ofx?

At a first glance, we see that each statement has an equation withxandyin it. We assume that those arent sufficient on their own, but if we combine them, then 2 equations should allow us to solve for 2 variables. Right? Give it a trysee what values you get

If you actually try to solve, youll see that statement (1) simplifies to [pmath]3x+y= 4[/pmath]. And statements (2) simplifies to exactly the same thing! We didnt really have 2 equationswe actually had 2 versions of thesameequation. The answer would be E, not C.

What is the value ofm?

Again, at a first glance it looks like each equation has 2 variables, so well need both statements to solve. What happens when you simplify statement (2), though? The non each side will cancel, leaving us with a value form. Thats sufficient!

We have to actually do the work to ensure that a) neither variable cancels out or b) we dont secretly have the same equation. We cant just jump to a conclusion without doing the work!

Here, if we combine the two statements, we can solve and find that[pmath]q= 7[/pmath] and[pmath]r= 6[/pmath], and then we can easily solve for the value ofp. So it seems like the answer should be C, right? But of course the GMAT is sneakier than that

Sometimes 2 equations will let us solve for the values of 2 variables, butthats not what the question really asked! First, rephrase the question:

If thats our question, then clearly statement (1) gives us a value for that expression. We didnt need the value of each variable individually, we just needed a value for the combo of [pmath]2r-q[/pmath].

If I asked you to solve forx, and just gave you the equation [pmath]13x+ 5y= 90[/pmath], you wouldnt be able to do it. One equation will never let you solve for two variablesthats what we learned in high school. But see what happens when we have a word problem:

If xylophones cost $13 apiece and [I cant think of an instrument that starts with y. Lets just say zithers] zithers cost $5 apiece at the Discount Music Emporium. If Wolfgang purchased at least one xylophone and one zither, then how many xylophones did Wolfgang buy?

(2) He bought the same number of xylophones as zithers.

If we use both statements together, we get [pmath]13x+ 5z= 90[/pmath] and[pmath]x=z[/pmath]. Two equations, so we can solve for two variables. But look again at the statements individually!

The second statement doesnt help, because that same number could be anything. On the first statement, though, ask yourself: are there multiple combinations of $13 and $5 amounts that could add to $90?

Because the numbers of xylophones and zithers have to bepositive integers, were just looking for combinations of multiples of 13 and multiples of 5. As it turns out, theres only one combination that adds up to $90: 13(5) + 5(5). Statement (1)just one single equation!was sufficient because the integer constraint restricted it to one possibility.

Another way that the GMAT will try to mess with our expectations about 2 equations 2 variables is by giving us two equations that create a quadratic:

What is the value ofk?

If we combine these two equations, well get a quadratic:

We find thatkcould equal 4 or 5, but well never know which. Quadratics give us two potential values, but theyre insufficient to give us a single value for a variable (unless theres a constraint, or a perfect square). Here, the answer would be E.

Remember, the GMAT likes to thwart your expectations! Dont assume that two equations will always be needed (or sufficient) to solve for two variables.

For more examples of these 2 equations 2 variables, try these problems. See if you can pinpoint which exception is being used in each: