Ive been wanting to do this problem with you for a while, but Ive been delaying because well, youll see when you get to the table. It takes a lot of work to recreate that in a blog post. :) But that ridiculously large table is also the reason why I want to talk about this one so lets test it out!

This problem can be found in GMATPrep 2.0. Normally, on table problems, youre able to re-sort the data according to various column headers. I cant recreate that functionality in a blog post, but Ill give you a hint: sorting actually isnt necessary for this particular problem.

Set your timer for 2.5 minutes. (You can take up to 3 on this one, but if you do decide to use extra time, use it wisely! Otherwise, its better to cut yourself off faster.)

The Consumer Price Index (CPI) measures the average prices of goods and services purchased by consumers. In the United States, the CPI-U calculates the CPI for all urban customers.

The CPI-U is calculated based on prices of food, clothing, shelter, fuels, transportation fares, charges for doctors and dentists services, drugs, and other goods and services that people buy for day-to-day living. All taxes directly associated with the purchase and use of items (such as, in the United States, sales taxes) are included in the index. An increase in CPI-U by a certain fractional amount means an increase by that fractional amount in overall prices within the relevant category.

For analyzing general price trends in the economy, seasonally adjusted prices are usually preferred over unadjusted prices because adjusting eliminates the effect of changes that normally occur at the same time and in about the same magnitude every year such as price movements resulting from climatic conditions, production cycles, model changeovers, and holidays. 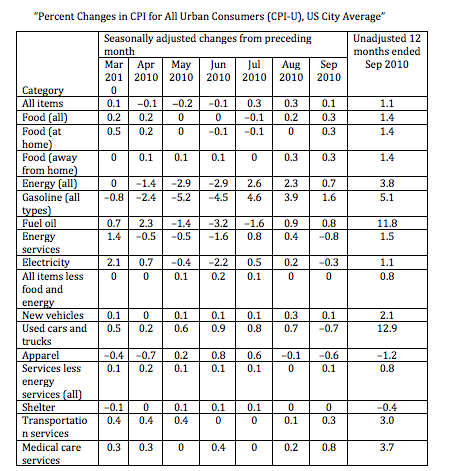 For each of the following, select Yes if the statement is inferable from the given information. Otherwise select No.

This table is ridiculous isnt it? And three paragraphs to start, before I even get to the question? Theres no way Im possibly going to look through all of this data in 2.5 minutes. (Hint. Thats one clue to solving these kinds of questions!)

In general, on tables, read the information that tells you what the table is about and look at all of the big labels (such as the column headers), but do NOT try to read / remember / understand all of the actual data points. Youll use whatever data you need when you get a specific question about that data but not before!

In this case, the first paragraph tells us that this CPI-U thing calculates average prices on a bunch of things for a certain population (urban consumers in the US). The second paragraph starts off by listing a bunch of categories ignore them. If you need to know the specific categories, you can come back here later. In fact, ignore most of the details here until we figure out what the questions are about.

The third paragraph explains that we generally prefer to use seasonally adjusted prices. A quick glance at the table shows us that it includes both adjusted and unadjusted numbers. It also explains why ignore this. Many, if not most, people will have used a minute or more at this point, so dont spend that time now. If you need to know why, you can come back here later to understand.

Finally, glance at the table labels. The columns list a bunch of individual months from 2010 and those are labeled seasonally adjusted changes from preceding month. Notice two important things here: These numbers are seasonally adjusted, not unadjusted, and each monthly figure is based on the change from the preceding month. The final column is for a whole 12 month period and these numbers are unadjusted. Finally, there are a million individual categories listed in the rows. L

Im not 100% sure that I understand the difference between adjusted and unadjusted but I dont care about that right now. Ill figure that out if I need to based on a specific question. Just keep going!

Now its time to examine the statements; heres the first one:

Lets see. They mention two categories: used cars and trucks and new vehicles. Great, I only need to look at those two rows. They also specifically mention adjusted for these, so I only care about the monthly columns. Scan until you find the right rows; luckily, theyre already right next to each other in the table.

Select No for statement 1.

The seasonally adjusted CPI-U for all items was higher in March 2010 than in the previous month.

This time, the statement is directing me to the all items category in the month-by-month (adjusted) timeframe. Thats right at the top of the table. Were specifically asked about March 2010 compared to the previous month, but the table doesnt include the previous month, so how can it tell us anything at all about February?

Read the labels! Right above the months, the table says Seasonally adjusted changes from preceding month. (Emphasis added.) In other words, the figure for March 2010 is based upon the change from February 2010. That change is positive, so it is true that the number for March is higher than the number for February.

And finally our third statement:

Read carefully! What data do they want now? Seasonally UNadjusted this time, not adjusted! The only data we have for the unadjusted category is based on the 12 months ended Sep 2010 we dont have month-by-month data! Therefore, I cant tell anything at all about what happened in August 2010 vs. July 2010 not for the UNadjusted data.

Note something very tricky. If you gloss over the Un in the word unadjusted, you might just go check the Aug and Jul columns for new vehicles and food away from home. For new vehicles, the change was 0.3. For food away from home, the change was 0.3. Those two numbers are the same and so you would pick Yes, and you would fall into the trap. We dont have any unadjusted data for the month of August alone.

Select No for statement 3.

The answers to the three statements are No, Yes, No.

In other words, we never have to look at the vast majority of the data in this table. They could have cut out 3/4 of the rows without changing the question at all except, perhaps, reducing the anxiety of a lot of test-takers when they saw a table with nearly 20 rows.

(1) You will NOT need to use all of the data, so when you see a crazy number of rows or columns, dont let yourself get anxious; instead, remind yourself that you wont need to look at most of this. Ditto for those three paragraphs of text at the top. Dont bother to read the table thoroughly or take in all of the data just know what kind of information is available, then return to whatever you need based on the question statements.

(3) Read carefully. When you have a table, by definition, the questions are going to hinge around whether youre examining the right cell or cells from the table. Make sure you read the statements carefully with this question in mind: What group / category are they asking me about now?

* All quotes copyright and courtesy of the Graduate Management Admissions Council. Usage of this material does not imply endorsement by GMAC.