How Much Can I Increase My GMAT Score? Target Test Prep Strategy 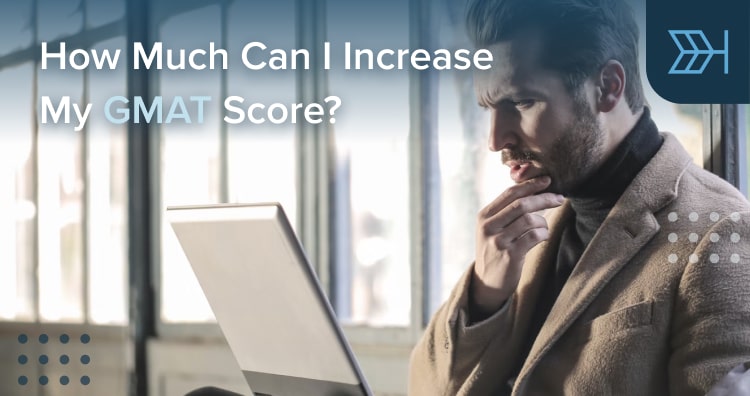 Whether you’re just beginning to look into the GMAT for business school admissions or you’ve been preparing for it for a while, a key question you may have is “How much can I increase my GMAT score?” So, in this article I’m going to discuss answers to this question, both some myths and the reality. I’ll also discuss some things you can do to ensure that your GMAT preparation results in score increases.

Let’s start by discussing some of the myths surrounding the question of how much you can increase your GMAT score.

Myths About How Much You Can Increase Your GMAT Score

The “peak score” myth is the idea that every GMAT aspirant has a peak score that that person can achieve and that, basically, more preparation won’t get that person to a higher score.

So, we can see why these results would cause the peak score myth. People see the results and decide that the reason why GMAT test-takers didn’t increase their scores is that they couldn’t.

Meanwhile, these results contributed to another myth as well, that your score decreases from too much preparation.

Myth #2: The Score Decrease From Too Much Preparation

The myth of the score decrease from too much preparation is the idea that, if you do more than a certain amount of GMAT study, your test score will decrease rather than increase. Now, while it’s true that, if you prepare for a long time, you may forget some things you learned early in your preparation, this myth doesn’t really make sense. After all, you can review things you learned early in your prep. Also, many people study for the GMAT for extended periods of time and continue to achieve higher and higher scores. Still, some people believe this myth.

So, if you’ve heard of either the “peak score” myth or the myth that your score will decrease from too much preparation, you now know part of the reason why these myths exist. The truth is that not achieving score increases and not being able to achieve score increases are two different things. As we’ll see, this difference is the reason why these myths are myths, and the reality is different.

So, what’s the reality? Let’s discuss that now.

You Can Increase Your GMAT Score as Much as You Want

My view is that you can increase your GMAT score as much as you want and achieve any score goal on test day. Clearly, this view is at odds with not only the myths we just discussed but also what many people believe about themselves. All the same, I find this view completely reasonable, and here’s why.

In fact, during the time I’ve worked in the GMAT space I’ve seen this logic prevail multiple times. One example is that of my friend Dan Cummins. Dan took the GMAT multiple times and went from a starting score of 430 to a final score of 710. The most powerful example I’ve seen is that of Dalal Aldilaimi, who started near the bottom of the GMAT score range at 250 and ended up at the top of the range at 780.

Logic dictates that we can all increase our GMAT scores as long as we keep preparing
Of course, the idea that you can improve your GMAT score as much as you want is nice, and it’s nice to see some examples of off-the-charts GMAT score improvements. However, you’re likely wondering what is a reasonable, rather than amazing, GMAT score increase. So, let’s discuss that now.

What Is a Reasonable GMAT Score Increase?