We invite all community contributors to share resources that are deemed to help students beat the GMAT. We've created individual threads to match the main topics, so please select the best fit for your content carefully.

In this article, we will continue looking at the different properties of a triangle. Also, links of two practice questions are given in the next post. These questions are specifically designed to help you apply the learning from this article.

With the above knowledge in mind, let us now look at the different types of triangles and understand how do their properties differ from one another.

Then we will then apply the learning on two GMAT like questions.


1. Properties of Different types of triangles


The table given below lists down the various types of triangles and their properties that are tested on the GMAT. The triangles are sequenced in such a way that the transitions/subtle differences in the corresponding properties are clearly visible. 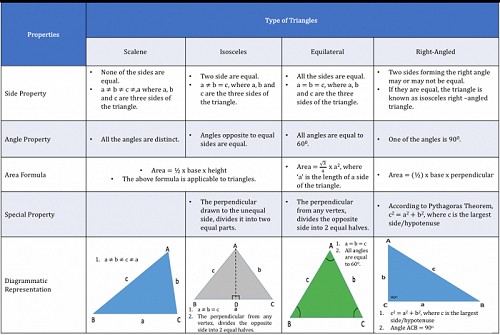 A right-angled triangle can be a scalene triangle or an isosceles triangle. Its depends on whether the lengths of the perpendicular and the base are equal.


Can you tell why can't a right-angled triangle be an equilateral triangle?


Can you notice the relation between the sides and the angles?


A right-angled triangle has one of its angles as 90 degrees. Since it can be a scalene triangle or an isosceles triangle, the value of the other two angles will depend on what kind of triangle it is.
(More will be discussed on this in the third section of the article) 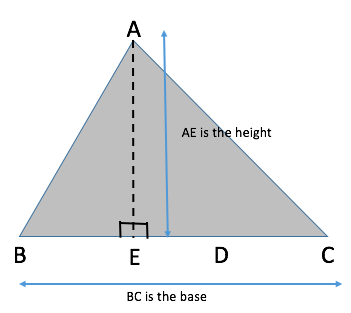 The area of an equilateral triangle or any special triangle is derived from the basic formula - Area = Â½ x base x height.

Thus, if we remember this formula, it is more than enough to solve any problem related to finding the area of a triangle.


The line joining one vertex of a triangle to the midpoint of the opposite side is called a median of the triangle.

In the case of an isosceles triangle, the median and the perpendicular is the same, when drawn from the vertex which joins the two equal sides.

Hence, from the given diagram, we can say that line AD acts as a median, dividing the base BC into two equal halves, and that AD is also perpendicular to BC.


The Right Angled Triangle has three sides known as the perpendicular, base and hypotenuse. The hypotenuse is the largest side and the angle opposite to it is the largest angle and measures 90 degrees.

We can apply Pythagoras Theorem, to define the relation between perpendicular, base and hypotenuse.

From the given diagram, we can write:


The summary of these concepts is given in a tabular form at the top of the article. Let us now, with the help of two GMAT like questions understand how to apply the above-mentioned properties. 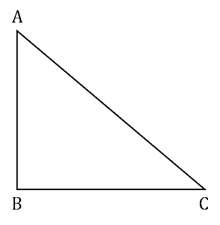 Using Pythagoras theorem, we know that the above is true if âˆ ABC=90


"¢ Since we could find a unique answer to the question, Statement 1 alone is sufficient.


Statement 2 tells us that AB = BC

However, we cannot conclude that ABC is a right-angled triangle because not every isosceles triangle is right-angled.

Hence, this statement is clearly not sufficient to solve the question. Therefore, Statement 2 is not sufficient.
Â
Step 5: Analyze Both Statements Together (if needed)

Since we've already arrived at a unique answer in Step 3, this step is not required.


From the triangle property table, we can use two properties to solve this question.

The perpendicular from A on BC, will divide BC into 2 equal halves. So BD = DC = 3 units


We hope these questions helped you in understanding the importance of the properties of triangles and their application in GMAT context.

Try to remember these properties in a methodical manner as given in the table and we are sure that you will be able to apply them successfully in all questions related to triangles.

Link to the other articles in this series :

Link to the other articles in this series