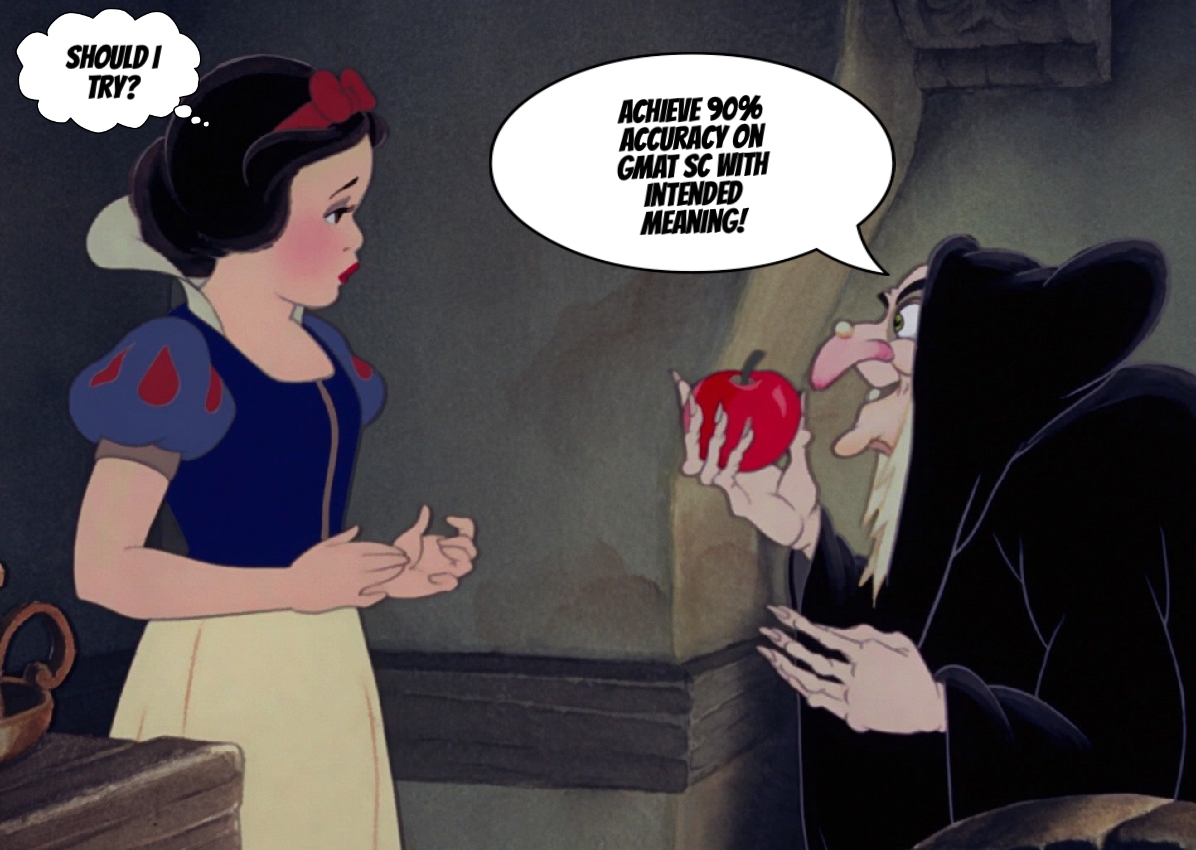 You always receive emails regarding “free” webinars: solve GMAT SC questions in less than 60 seconds, achieve 90% accuracy on GMAT SC questions, etc. You attend those webinars, expecting you’ll be able to increase your Verbal score. You spend months studying, but your score is still stuck at V26 or V30. What went wrong? The truth is, gimmicks won’t earn you a high GMAT Verbal score, and in some cases, relying on such gimmicks may even hurt your score. Every GMAT test-taker looks for ways to make prepping for test day quicker and easier. At the same time, we have to be careful not to seek to use gimmicky methods for answering Verbal questions. Gimmicky methods of tackling GMAT Verbal may get your score into the low 30s, but they won’t be enough to help you continue to increase your score. So, let's discuss the biggest score-killer on GMAT Sentence Correction: Intended Meaning.

“Original” Sentence Is Not Special

Some GMAT students get the impression that the original sentence in an SC question stem conveys the “true” or intended meaning of the correct sentence, or that answer choices that deviate significantly from the “original” sentence will not be correct. Indeed, these Sentence Correction myths have been around for a long time.

In reality, all answer choices must be weighed equally. Choice (A) does not set a standard for the sentence meaning or structure that must be followed by the correct answer. In fact, in many Sentence Correction questions, all five answer choices provided are quite different from one another. A correct answer choice may create a sentence version that conveys a meaning that is very different from the meaning created by choice (A), or incorporate a word or phrase that didn’t appear in choice (A) (or eliminate one that did).

As a result, you must resist the urge to view the meaning of the sentence in the question stem as the “real” or “correct” meaning. There is no intended meaning that the correct sentence version has to express. The correct version will be the one that most effectively expresses a logical meaning.

The sentence meaning expressed by the “original” sentence version is not the “intended” meaning that the correct sentence version must convey. All answer choices have equal weight and should be considered equally.

Where Did the Intended Meaning Myth Come From?

I suspect that the intended meaning myth arose because, when people couldn’t see why an answer choice in an SC question is wrong, they erroneously decided that the only way to choose the right answer is to predict what the author’s intended meaning is.

The truth of the matter is that, in a well-written Sentence Correction question, such as an official SC question written by GMAC or a well-written third-party SC question (for instance, one written by Target Test Prep), there is only one sentence version that both is grammatically correct and effectively conveys a logical meaning.

Think high GMAT scores are out of your reach? Start your $1 trial of the Target Test Prep GMAT Course today, and see for yourself why test-takers around the world are making the switch to TTP.

Good luck studying, and reach out to me if you have any questions or need any more specific advice.